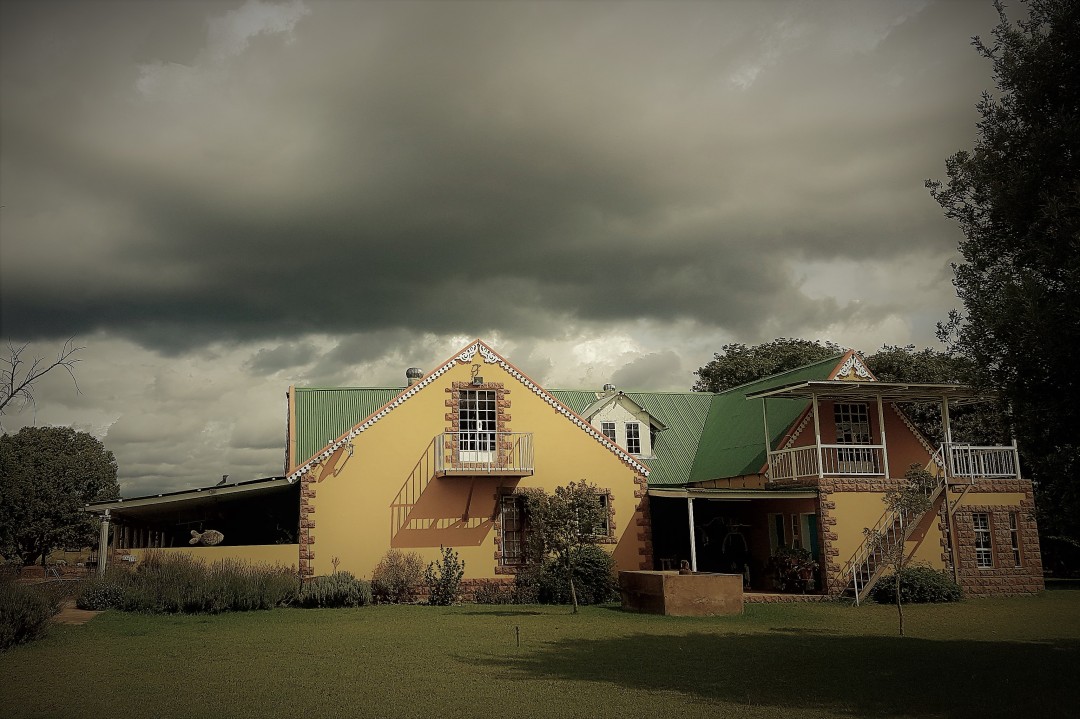 The ground was bought by Jakkals Pretorius, your host, in 1985.  It was barren but for two lonely trees.  It took a year to build the first structure, with no running water or electricity the going was tough.  With Jakkals still employed full time, and home very seldom slowly the store took shape.

The first priority was to build the bathroom, as a tree for a latrine, is not to everyone’s taste, especially when the toilet paper was forgotten in town.  So with the help of some friends one Saturday morning, the bathroom was put together, celebrated there after with the South African tradition, the Braai.

Jakkals, being a bachelor then decided, it is time to pick a queen for his castle.  He could provide for her a dwelling, bringing new meaning to the word rustic.  He obviously sorely needed a woman’s motivation in order to get the ball rolling.  Seven long years later, Jakkals and Maxi were wed.  Their wedding night, was spent outside their new home, amongst the chickens in an empty pen, as the in-laws had the inside of the home.

By this time, the castle foundations were already ground height, with the floor waiting for the walls to be built.  That said, the dwelling had by this time been renovated.  It now had a kitchen, a separate bedroom with a lounge.  Life was indeed becoming a pleasure!

As the years continued, the castle grew walls, and eventually a roof was attached.  Then, with a bang, the couple were blessed with a son.  This event, brought about an urgency in upgrading their living circumstances quite drastically.  As such they came up with a temporary solution.  The kitchen, laundry, pantry and breakfast nook of the planned main house were to be completed with utmost haste in order to move into this portion of the house.  The pantry, was to be the main bedroom, the laundry, would be Baby’s room.  The breakfast nook was their lounge and cooking was still done under the old roof, while the equipment was installed in the new kitchen.

Eventually, they were successfully farming with prickly pear, they had a beautiful garden, running water and electricity was fully installed.  The queen of her castle, was a master glass blower, with her own studio offering weekend courses to the arty crowd.  The main house was tiled, the main bedroom now was occupied and the store was rented out as accommodation.  All 5 guest rooms were completed with 2 completed en-suites.

At this stage it was decided by the neighbouring farmers to drop their fences in order to have a consolidated game farm.  With this the guest house was born.

Every year the house changed, new designs were brought in, the pool was dug and eventually completed.  The upstairs floor was installed.  All the while many more trees were planted and now stand tall and proud offering a tranquil retreat in the shade for dogs, cats and travelers alike.

We now welcome you to come enjoy our haven where one can still witness a starry night, in a magical castle with tales of old.